Psomagen had the pleasure of reconnecting with one of our long-term clients, Dr. Taras K. Oleksyk, at our booth during ASHG 2022. Dr. Oleksyk is an Assistant Professor of Biological Sciences at Oakland University, and an adjunct professor at the University of Puerto Rico-Mayagüez. His research interests include human population genetics, evolutionary genetics, and endangered species evolution.

In 2012, Dr. Oleksyk conducted groundbreaking genomics research by sequencing the genome of the Puerto Rican parrot (known locally as the iguaca).1 Ten years out from his first groundbreaking parrot sequencing, our team was delighted to sit down with him and discuss the ways his research has impacted both endangered animal species and the human population of Puerto Rico.

When Dr. Oleksyk moved to Puerto Rico and began his research, he didn’t have the iguaca in mind. Instead, he asked one important question: “How can I get the attention of young students and get them interested in genomics?”

The Puerto Rican parrot is an iconic image of Puerto Rico, and also a species in the spotlight of conservation efforts. The birds are important to the island's ecosystem, as they are responsible for seed dispersal and the growth of new plants. Unfortunately, it is one of the 10 most endangered bird species in the world; in the 1970s, its population was reduced to only 16 birds in captivity. Dr. Oleksyk recognized that the bird has a relatively small genome, and sequencing it would help with the population recovery effort.

Choosing the iguaca sent his research into uncharted territory. “Today, I’ve published 94 parrot genomes, so this is not a big deal anymore,” said Dr. Oleksyk. “But back then, it was the first parrot genome to be published.” Genome sequencing had been notoriously expensive for decades. In 2010, a comparable sequencing project would’ve cost $100,000. However, by 2012 the price had dropped to $10,000. Suddenly, sequencing the parrot genome was a real possibility.

This is when Dr. Oleksyk and his team got creative. “We didn’t have any money…so we actually ran some community fundraising events.” These events included art exhibits and fashion shows, and were heavily supported by university students donating a few dollars at a time. After four community fundraisers, Dr. Oleksyk had $2,000 for sequencing the parrot genome.

This was still not enough for most companies to take on the sequencing project—as Dr. Oleksyk, put it, "Everyone I approached said they weren't interested, but Axeq said, 'Okay, let's do this.'" Axeq Technologies was a subsidiary of Macrogen until 2016, when three Macrogen entities merged to become Macrogen USA. In turn, Macrogen USA became Psomagen in 2019. 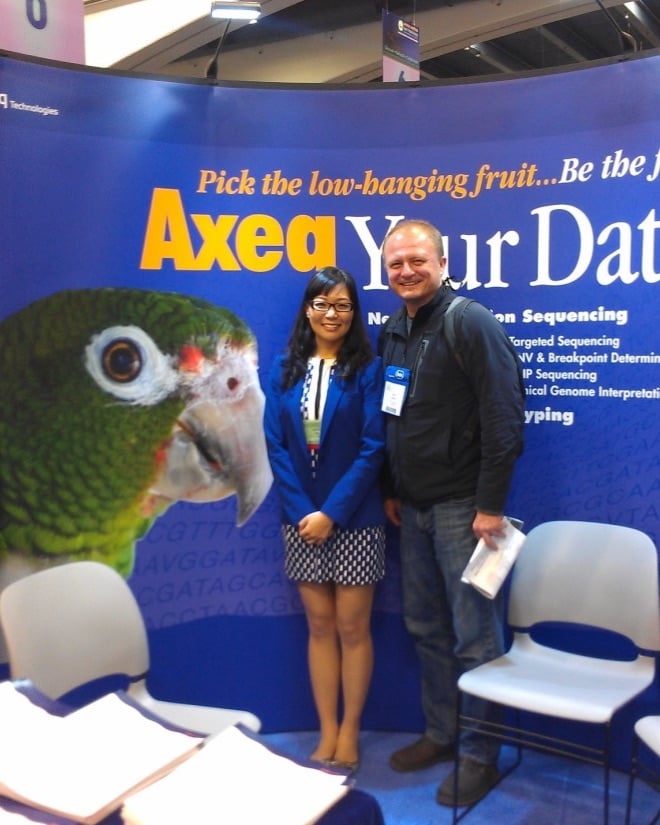 Dr. Oleksyk and an Axeq representative at the 2012 ASHG Axeq booth, featuring his Puerto Rican parrot.

Dr. Oleksyk's project sequenced the genome of three Caribbean parrot species. Because of the genetic bottleneck the population went through in the 1970s, the iguacas' genomes were nearly identical. This research proved the necessity of strengthening the population's genetic diversity in future conservation efforts.

Conservation projects continue for the Puerto Rican parrot, with significant milestones in recent years. In 2016, roughly 500 parrots had been reintroduced to the wild, when forty years earlier there were none left outside of captivity. Reintroducing the parrot to the ecosystem is a point of pride for the island. "The Puerto Rican parrot is Puerto Rico," Dr. Oleksyk explained, "there is no Puerto Rico without the parrot."

A Puerto Rican parrot reintroduced to the wild.2

Just as importantly, this project drew the attention of young researchers and the larger community. In Dr. Oleksyk's words, "[The project] brought up the pride of the people. People were excited that real science was done in their country. Students got excited for it, that's what's important." Local and international news outlets loved the story, which got the attention of the University of Puerto Rico. Dr. Oleksyk's lab was able to purchase their own sequencer, and organized the Caribbean Genome Center. Students trained how to build genetic maps, and the organization was awarded three federal grants.

The lab's work also brought international attention to scientific research in Puerto Rico. Local and worldwide news outlets took notice of the parrot project (and even led to a Tedx Talk from Dr. Oleksyk himself). "The project opened up lots of opportunities," said Dr. Oleksyk. "The Society of Molecular Biology and Evolution had a meeting in Puerto Rico partially because of this project. We were able to bring a very large international scientific meeting to San Juan." Previously an unlikely candidate for major genetic research, this project helped put Puerto Rico on the map.

The Spread of Community-Funded Genomics

Before sequencing the iguaca, community funded genome projects were unheard of. As Dr. Oleksyk explained, “At the time, sequencing a genome was only possible because of big corporations or universities putting the money in.... It was all very new back then, using the internet and undergraduate education to get people involved.”

Today, projects like these are more common. The work done in Puerto Rico has inspired projects as far away as Hong Kong. There, a locally funded project sequenced the bauhinia, the flower on the Hong Kong flag. Their research indicated that Bauhinia blakeana likely has a strong relationship with Bauhinia acuminata, another flowering shrub native to southeast Asia.

The bauhinia on an orchid tree and on the Hong Kong flag.

Because of the success of animal sequencing projects, Dr. Oleksyk and his students were able to develop human genomics projects as well. In 2013, his students conducted research on the genetic heritage of Puerto Ricans. They collected DNA samples from locals and studied genes associated with heart attacks, eye color, and hair color. The goal of this research involved describing genetic diversity in Puerto Rico using one study at a time to come up with a larger picture. Having genetic studies conducted in Puerto Rico is important to the future of human healthcare. As Dr. Oleksyk explained, "healthcare in Puerto Rico can really benefit [from Puerto Rican genetic studies], because this population will not be studied by the proxy of something else. They won't study Mexicans and say 'Okay, Puerto Ricans are the same.'" Putting Puerto Ricans at the center of their own genetic studies will provide more tailored insights into the population's healthcare needs.

Today, Dr. Oleksyk continues to work with new genomics projects in Puerto Rico. In 2018, his team published a paper after sequencing Solenodon paradoxus, an endangered mammal that has lived on Hispaniola and Cuba for approximately 70 million years. Whole genome assembly had never before been performed on the solenodon. This study allowed researchers to theorize that a subspecies split in the Hispaniolan solenodon occurred at least 300,000 years ago.

(A) S. p. paradoxus and (B) S. p. woodi, the two surviving subspecies of Solenodon paradoxus.3

Most recently, Dr. Oleksyk's students were involved in research on two groups of Puerto Rican horses: the Criollo and the paso fino.4 By sequencing 200 horses from 27 regions of Puerto RIco, the project discovered that the paso fino has a genetic component almost completely unique to its breed.

This led to legislative action in Puerto Rico. In January of 2022, a bill was introduced to the Puerto Rican House of Representatives, which declared the paso fino a part of Puerto Rico’s national heritage. All authors of this study were acknowledged for their contribution to this cultural milestone. 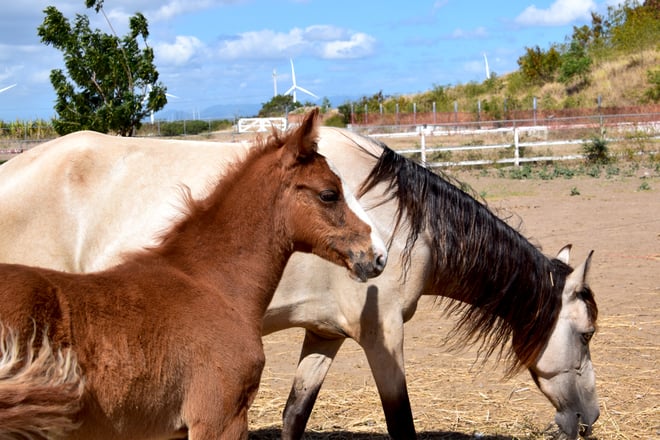 Looking to the Future

Outside of Puerto Rico, Dr. Oleksyk has worked on other projects that make use of the "pioneer advantage," researching previously under-analyzed populations to achieve greater scientific results. In a recent study on Ukrainian genomes, Dr. Oleksyk and fellow researchers discovered nearly half a million previously unregistered SNPs from fewer than 100 genomes. The study determined that Ukrainian genomes were distinct from other European populations, and from subpopulations of ethnic Russians.

Eliminating this and other "genome deserts" is an important step to understanding global genome variation and making critical discoveries. In healthcare and genetic research, local genomic data is substantially more useful than analysis drawn from other populations.

Particularly in avian sequencing and Ukraine genomics studies, Dr. Oleksyk and his team have turned to Psomagen for sequencing. "Over the years I've developed a great relationship with David Song. When we sequence," Dr. Oleksyk says, "we always try to sequence with you. I've sent as many people as possible to you, and I've always recommended Psomagen as very reliable." Psomagen looks forward to being part of many new pioneering projects by Dr. Oleksyk and his lab. We're always excited to be a part of projects that people are passionate about!

Looking for other examples of genomics in action? Take a look at this video on plant DNA analysis from the Schnable Lab at the University of Nebraska. 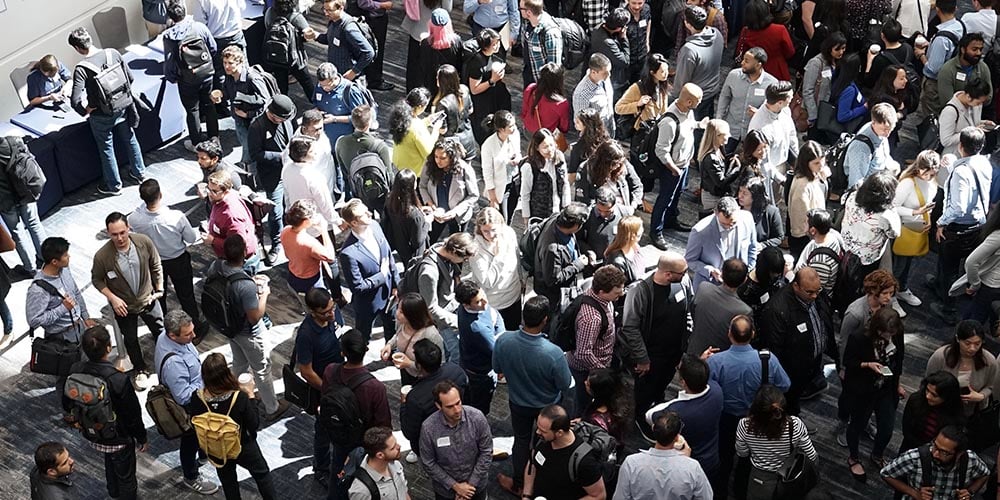 The Top Five Genome Conferences in the World 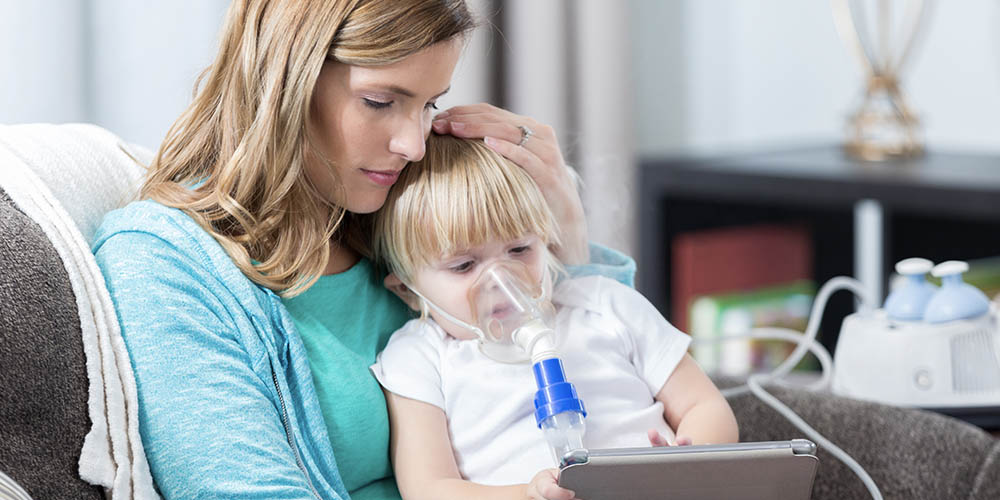 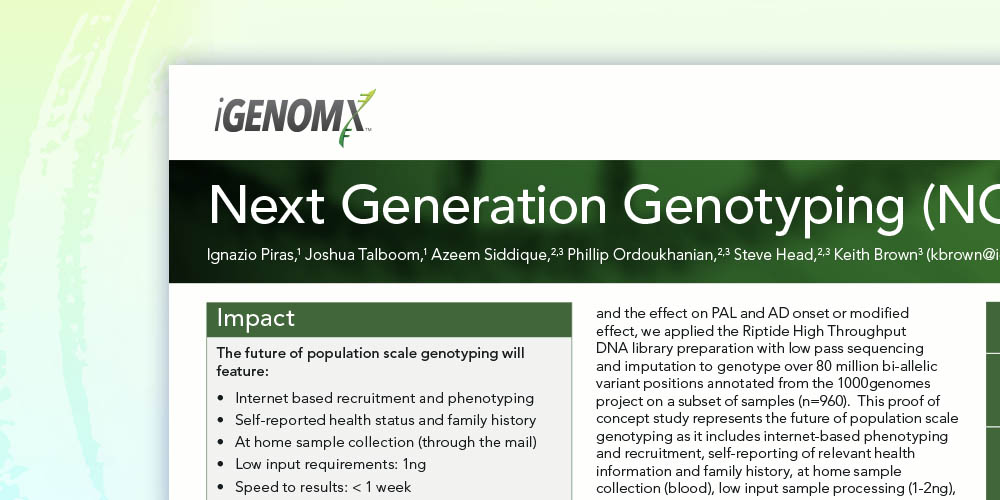